The Kingship of Christ

This kingdom is opposed to none other than to that of Satan and to the power of darkness. It demands of its subjects a spirit of detachment from riches and earthly things, and a spirit of gentleness. They must hunger and thirst after justice, and more than this, they must deny themselves and carry the cross.

Being a leader means, first of all, accepting Jesus Christ as the ruler of your life. The martyrs of Mexico all lived—and died—with these words on their lips: Viva Cristo Rey! (“Long live Christ the King!”) To be true leaders, the living Christ must be your king.

The Queenship of Mary and her rule over angels and men is the result of and inseparable from the Kingship of her Divine Son. As Pius XII wrote in his 1954 encyclical Ad Caeli Reginam: “Certainly, in the full and strict meaning of the term, only Jesus Christ, the God-Man, is King; but Mary, too, as Mother of the divine Christ, as His associate in the redemption, in his struggle with His enemies and His final victory over them, has a share, though in a limited and analogous way, in His royal dignity.” To fully understand the Queenship of the Mother, we must understand and accept the Kingship of the Son.

In Los Angeles, there are two parishes dedicated to Our Lord’s Royalty. One of these, the modest mission style Cristo Rey, was founded in 1939 for Spanish-speakers in the Attwater district of the City. Many of these had fled the suppression of the Cristero rising in Mexico; like their friends and relations who, as Archbishop Gomez says, died with Viva Cristo Rey! On their lips, they were devoted to Christ the King.

More elaborate is the ornate Italian Byzantine Church of Christ the King on Rossmore in south Hollywood. Founded in 1926, the year after Pius XI issued his groundbreaking encyclical, Quas Primas, on the Kingship of Christ (which also decreed the feast of Christ the King), the new parish initially attracted many well-to-do members from the film community. In front of the church, a huge statue of Christ, King of All Nations — with His Sacred Heart, crown, sceptre, and the Earth as an orb — stands proudly facing the street. Inside, the reredos features a crowned Christ in glory.

Both of these parishes reflect the fairly recent nature of devotion to Christ under that title. From Royal Oak, Michigan, where Fr,. Coughlin’s famed Shrine of the Little Flower boasts a truly amazing art deco Christ the King Chapel (it boasts a statue of the Saviour surrounded by all the coats-of-arms of the World’s then-independent nations, and is topped by the legend “King of the Nations, Keystone Uniting That Which is Divided”); to Paris, France, where a beautiful shrine to Christ the King was completed in 1940 and torn down in 1977; to the — again, art deco — churches of that name in Dallas and Tulsa, to any number of churches around the world of more or less beauty (this writer really dislikes the cathedral of Christ the King in Liverpool!); all of them are relatively recent. 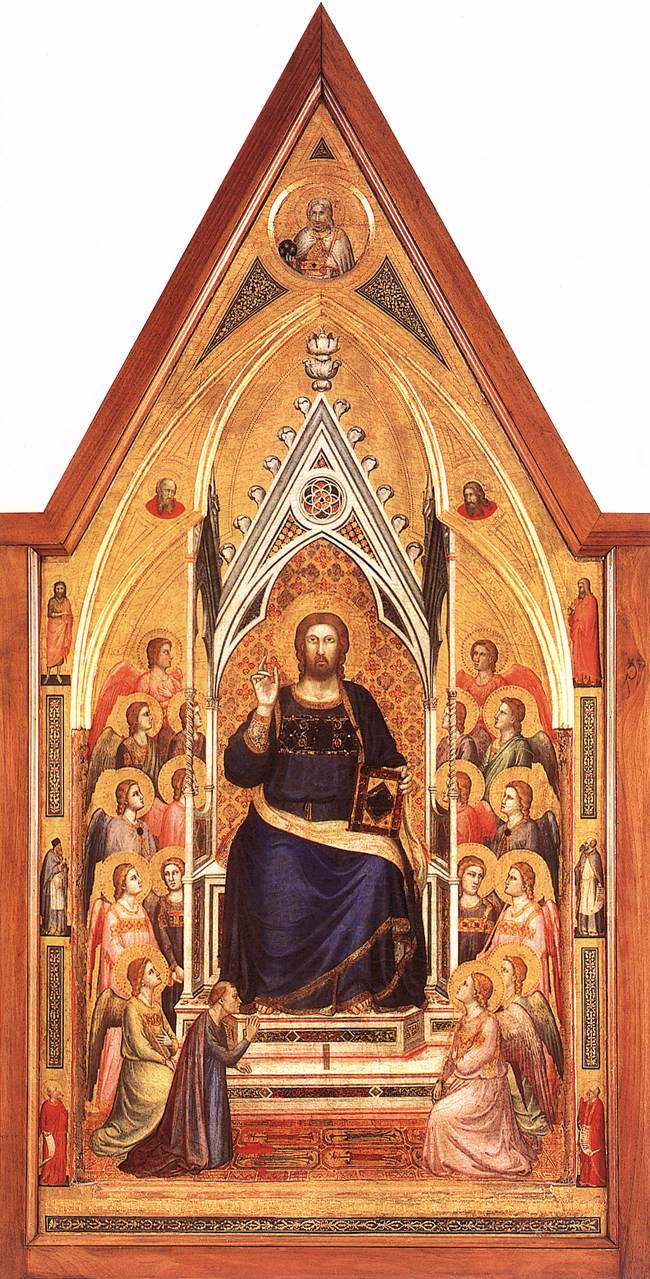 Reflecting on the similar youth of the feast itself, the website of the now suppressed parish of Holy Trinity, Boston, opines that: “because the feast is less than a hundred years old, no other distinctive customs or rituals have yet accrued to its observance. This leaves a vacuum into which we can offer only the most unauthoritative suggestions. In our opinion, for example, wreath customs similar to those from the Feast of Corpus Christi would be a good way of observing the day, as a wreath betokens the supreme symbol of kingship, the crown. Likewise, a lamb dinner would hearken to the vision given in today’s Introit (there is even a blessing for lamb from the Roman ritual that could be used). In any case, the Feast should be used as an occasion for solemnly affirming Christ as the King of our heart and of our country.”

All true, although the same sight points out that, in his encyclical, Pius XI envisioned Catholics all making on this day the Act of Dedication of the Human Race to the Sacred Heart of Jesus, an indulgenced prayer found both in the old Raccolta and the current Enchiridion of Indulgences.

Christ’s Royal dignity comes from several sources: a) by legitimate descent as heir of King David, He was born the rightful Monarch of Israel; b) as Pius XI says in his encyclical, “Christ, has dominion over all creatures, a dominion not seized by violence nor usurped, but his by essence and by nature,” that is, as Second person of the Holy Trinity, “by whom all things were made;” and c) by conquest, having died for the salvation of every human being ever born, and winning for each of us the chance of Salvation. On these three counts, then, He is owed allegiance by all — not merely by Catholics, Orthodox, and other Christians, but by all.

Yet, as Pius further teaches, this allegiance is not to be seen as a purely individual thing, but as something owed by humanity as communities, as nations, and as a whole. Speaking of this, Pius declares that: “Nations will be reminded by the annual celebration of this feast that not only private individuals but also rulers and princes are bound to give public honor and obedience to Christ. It will call to their minds the thought of the last judgment, wherein Christ, who has been cast out of public life, despised, neglected and ignored, will most severely avenge these insults; for his kingly dignity demands that the State should take account of the commandments of God and of Christian principles, both in making laws and in administering justice, and also in providing for the young a sound moral education.”

Obviously, the principles of Quas Primas are ignored by almost every nation in the world today, even where such ceremonies as the Red Mass, the annual liturgy of the Holy Spirit for the judiciary and legal professions is still offered. Indeed, one can only wince at the solemn attendance of Supreme Court Justices in Washington at this event, after their decision of Roe v. Wade. Indeed, of all the social encyclicals written by Popes in the 19th and 20th centuries, Quas Primas is certainly the most radical, and so the most ignored.

Pope Pius XI, who issued the Quas Primas on the Kingship of Christ

But the principles contained in the document were not original to Pius XI, but extend all the way back to the New Testament, and, via prophecy, to the Old. After the breakdown of Christian-inspired social order with the French Revolution and attendant wars, those fought most strongly, either militarily or politically, for the Kingship of Christ adopted the Sacred Heart as their badge — symbolizing as it does Christ’s complete loving sacrifice of Himself for humanity. In the Vendee, the Tyrol, Spain, Switzerland, Italy, and many other places throughout the 19th century (most notably by the Papal Zouaves who defended the Papal States during the 1860s), such combatants united their own sufferings with those of their King. This is why the Deciation of the Human Race to the Sacred Heart was a natural addition to the rites of the new feats of Christ the King: devotion to His Royalty was a natural outflow of reverence for His loving Heart.

In the period following Quas Primas’ publication, observance of the feast of Christ the King became an answer on the part of Catholics to oppression by state authorities. In Mexico, as we have seen, it became a rallying cry; in Nazi Germany processions on this day were a way of showing disapproval for the regime. These examples could be endlessly repeated. But by the same token, governments and peoples that wished to follow Pius’ teaching erected (and still erect) monuments in honor of Christ’s Kingship. In 1946, in emulation of the consecration of various nations to the Sacred Heart by their Heads of State, King Mutara III of Rwanda offered his country to Christ the King — all too aware of the nation’s internal tensions that would result, after independence from Belgium, of his brother’s overthrow and resulting waves of genocide.

It should not be thought that the Kingship of Christ, despite the hostility of many of the powers that be across the globe, is an outmoded concept. In a homily on the feast in 2007, Benedict XVI declared that “The Church is the trustee of the mystery of Christ: She is so in all humility and without a shadow of pride or arrogance, because it concerns the maximum gift that she has received without any merit and that she is called to offer gratuitously to humanity of every age, as the horizon of meaning and salvation. It is not a philosophy, it is not a gnosis, even though it also comprises wisdom and knowledge. It is the mystery of Christ, it is Christ himself, the Logos incarnate, dead and risen, made King of the universe. How can one fail to feel a rush of enthusiasm full of gratitude for having been permitted to contemplate the splendour of this revelation? How can one not feel at the same time the joy and the responsibility to serve this King, to witness his Lordship with one’s life and word?. . .”

How, then, are to respond, as individuals, to the call of the Church to honor Christ as King? To begin, by reading Quas Primas, and internalizing its principles; by cultivating a devotion to the Sacred Heart, and making the Dedication, as well as enthroning the image of the Sacred Heart in our homes; by urging our pastors to celebrate the Feast of Christ the King with as much solemnity as can be mustered — even to the point of larger or smaller processions. But beyond that, to call upon our local, State, and National leaders to honor Christ as King. If, in the current state affairs, even such innocuous moves as Christmas Nativity Scenes on public property are deemed unconstitutional, we can challenge them on strictly political grounds in precisely the areas touched on by Pius XI: life and family issues, education, and all the other areas in which governments struggle mightily to render society not merely anti-Christ, but anti-human.

May heads of nations fear Thy name
And spread Thy honor through their lands,
Our nation’s laws, our arts proclaim
The beauty of Thy just commands.
Let kings the crown and sceptre hold
As pledge of Thy supremacy;
And Thou all lands, all tribes enfold
In one fair realm of charity.

In all of this, too, we must not lose sight of two other key issues, more important than mere political action: the need to evangelize, so as to make others aware of the rightful place of Christ and His Church in their lives; and the Queenship of Mary, which ever goes hand in hand with the Kingship of her Son.