As we have seen in the other pages in this section, the ancient Orders of Chivalry survive, and maintain the religious and charitable spirit of their forebears. But changes in warfare have swept the armored knight from off the battlefield, while political alterations have seen the vast majority of the governments of the Earth enact legislation and policies opposed to the teachings of the Church — and this includes the very few remaining countries where the Church is the “Established” religion of the State. There are, today, perhaps only two armies which may in any sense be called “Catholic,” and both are minuscule: the Papal Swiss Guard, and the tiny army of the Order of Malta. One might well think that the particularly “military” aspect of Chivalry is dead. But one would be wrong.

Coat of Arms for the Archdiocese of the Military

Thousands if not millions of Catholics are under arms today in the uniforms of many different countries. Whereas, in the days of Chivalry, such as these would be expected to shed their blood in defense of the Cross of Christ, today they must do so entirely for the goals of their rulers, whether these be selfish, altruistic, or both — even as in the time of the Roman Legions before the Church was legalized by Constantine. In that era, Catholic Legionaries were among the most effective soldiers serving the Emperor, whom they obeyed just as steadfastly as they refused to worship him. Some Emperors were quite content to allow these men their odd religion, so long as they served well; others attempted to force their Christian servitors to forsake their religion, even if that meant eliminating their best soldiers from the ranks. In some ways, it was a very modern time. But the refusal of those brave men to give up their God led to the martyrdom of many and the first wave of military saints to grace the Church’s calendar. 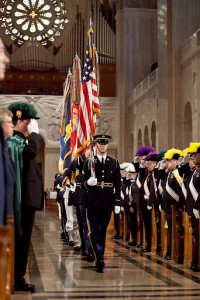 Color Guard at the 2011 Memorial Mass in Washington D.C.

The Catholic soldier of today, despite the technological changes of the modern battlefield, is as dependent for survival on the Grace of God as ever were any of his predecessors. Moreover, the strains modern deployment can put on family life also requires effective action by the Church. In the Catholic chaplaincies of the World’s armed forces one can see today the same spirit of religious devotion and military fervor that characterized the knights of old.

Historically, this is not too surprising, because the work of priests in accompanying armies does go back much further than the emergence of the modern national militaries. In 742, the Council of Regensburg sanctioned the attendance of priests upon military campaigns to confect the Sacraments for soldiers. St. Louis IX of France was perhaps the first monarch to give a distinct legal status to military chaplains. In 1773, Maria Theresa of Austria arranged for the appointment of a military bishop. Those countries that embraced Protestantism appointed military chaplains of their own faiths: but as the 19th century wore on, and most countries became multi-faith, their military chaplains reflected this. In the United States Catholic Chaplains were banned from the armed forces until the Mexican War; this was one of the reasons for the defection of the San Patricio Battalion (though physical abuse and the looting of Catholic churches by other American troops also contributed). The government in Washington swiftly remedied this situation, and Catholic chaplains served with great distinction on both sides in the Civil War. The year 1864 saw chaplains of all nations and denominations granted non-combatant status. Henceforth, if captured they had to be returned to their own lines, unless they elected to care for POWs. 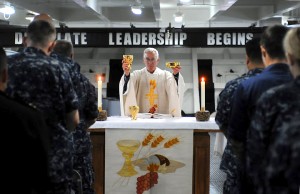 In the Catholic Church, prior to 1986, those countries with sufficient numbers of Catholic soldiers had “Military Vicariates,” bodies which encompassed all the Catholics chaplains of the nation under a Bishop responsible to the Pope. Since 1986, when Bl. John Paul II issued the apostolic constitution Spirituali militum curae, each national Catholic military chaplaincy has become a “Military Ordinariate;” a diocese in its own right. The military archbishop or bishop is a full diocesan member of the given national bishops’ conference. The boundaries of his diocese cover the entire nation, as well as anywhere abroad his country’s troops may be serving. Often, his cathedral will be a venerable church of long-standing historic connections with the military. The parishes are any chapel where Catholic chaplains minister to soldiers, sailors, airmen, and their families. Under these challenging conditions — made more complex by the extreme mobility of the flock — the bishop and his clergy attempt to conduct as far as possible the normal life of a diocese: liturgy, confirmations, catechesis, pilgrimages, devotions to Our Lady and the Saints (especially the military ones and the patrons of the various branches), counselling, aid to the impoverished, and so on. During multinational peacekeeping missions, the military diocese of the participating nations are responsible for the spiritual welfare of their own soldiers — there are no UN, NATO, EU, or other international chaplains as such , though in such situations chaplains are always ready to assist those of allied countries or enemy POWs. 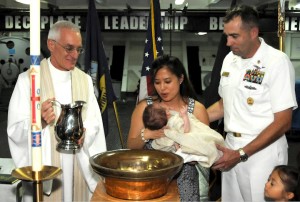 These dioceses are generally established by agreement between the national government and the Holy See. Traditionally, whenever a regime was intent on secularizing its subjects, it would abolish whatever chaplaincies — military as well as Parliamentary, university, or whatever — served its people. Today, most governments with a large number of Catholics in their armed forces have come to realize that they fight better when their spiritual needs are served — regardless of how distasteful the regime in question might find the Church’s teachings on, say, abortion or same-sex “marriage.” In practice, the military diocese must work in concert as far as personnel goes with the local government’s Chaplain Corps — not only in terms of employment standards, but also as regards working with chaplains and soldiers of other religions.

All of that having been said, the spiritual life of these formations is often rich and full. Especially for those countries engaged in active conflict, the realization that death may be lurking in the near future adds an immediacy and urgency to military piety. Depending on the country, a number of devotions that the Crusaders would have been familiar with may be found. The reason is simple: regardless of the motivations of the government at war, for the soldier himself the ideals of honor and self-sacrifice are essentials. Regardless of whether the civilian authorities intend to make the world safe for democracy or just to liberate some of the natural resources of a neighboring country, those on the front-line fight for their comrades beside them and for those they leave behind. Whatever the era or the place, one thing always remains constant for the Catholic-in-arms: “Greater love hath no man than to lay down his life for his friends.”

Diocese of the Armed Forces
http://www.army-chaplaincy.be/fr/index.php

Co-Cathedral of St. James on the Coudenberg, Brussels
http://fr.wikipedia.org/wiki/%C3%89glise_Saint-Jacques-sur-Coudenberg

Center of the Priory of Dinard
http://dioceseauxarmees.catholique.fr/prieure-de-dinard.html

Church of Our Lady of the Armies, Versailles
http://www.notre-damedesarmees-catholique-yvelines.cef.fr/NOUV/notrehist.html

Church of the holy Shroud of the Piedmontese, Rome
http://it.wikipedia.org/wiki/Chiesa_del_Santissimo_Sudario_dei_Piemontes

Cathedral of Our Lady, Queen of the Polish Army, Warsaw
http://www.katedrapolowa.pl/

Cathedral of the Armed Forces of Spain
http://www.arzobispadocastrense.com/arzo/index.php/iglesia-catedral-de-las-fas.html

Office of Pastoral Care of the Army of Brazil
http://www.exercito.gov.br/web/guest/sarex
http://www.dgp.eb.mil.br/portalsarex/sarexdgp.asp

Diocese of the Armed Forces and the National Police of Paraguay
http://www.episcopal.org.py/pagina/8/54/0/0/fuerzas-armadas-y-policia-nac.html

Religious Support in the Army of Peru
http://www.ejercito.mil.pe/index.php?option=com_docman&Itemid=507

Archdiocese for the Military Services of the United States
http://www.milarch.org/site/c.dwJXKgOUJiIaG/b.6287817/k.3DFD/Home__Archdiocese_for_the_Military.htm

Catholics in the Military
http://www.catholicmil.org/index.php?option=com_content&view=frontpage&Itemid=185

National Conference on Ministry to the Armed Forces
http://ncmaf.org/