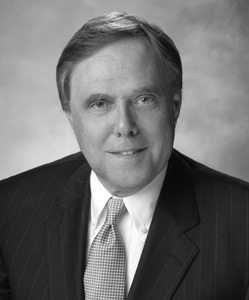 William A. Shaw is a Director of the Queen of Angels Foundation.

Apart from his philanthropic activities, Bill is the President and C.E.O. of Roxbury Properties Inc, a full service real estate company located in Beverly Hills, California.

Bill graduated from Drake University with a Bachelor of Science in Pharmacy and from the University of Iowa, College of Law with a Juris Doctor Degree.

After law school, he served as a Deputy District Attorney for Los Angeles County. He was then appointed by the Attorney General of the United States to the Offices of the United States Attorney where he served first in the Criminal and then the Civil Division. Bill finished his government services working in the White House during the Administration of President Gerald R. Ford.

Shaw is licensed to practice law in California, New York, the District of Columbia and Iowa. He also is admitted to practice before the United States Supreme Court and numerous federal courts. Shaw is also a licensed California real estate broker. Shaw has served on numerous boards and philanthropic organizations. He is a Board member at St. John’s Seminary. He is a member of the Order of Malta. He is a 4th degree Knight of Columbus. He has served in numerous positions at Good Shepherd Catholic Church in Beverly Hills as President of the Pastoral Council and he currently serves on the Financial counsel. He served on the Board of St. Thomas the Apostle Parish. He is a Board member of the John Thomas Dyes School and has for many years been a member of the Board of Director of the Los Angeles Area Boys Scouts of America. He is a Past President of the Big Ten Club of South in California and for 12 years produced the Rose Bowl Dinner, the Dinners for Champions. He is a four term Past President of the Apartment Association of Greater Los Angeles and a longtime member of Rotary 5, the Rotary Club of Los Angeles.

Shaw has received a host of honors and awards ranging from the United States Department of Justice award for outstanding merit and Presidential awards from President Gerald Ford for his service in his administration and from President Bill Clinton for his efforts during the Northridge earthquake. He has been recognized for outstanding service by the State of California Senate and Assembly, the county of Los Angeles and the cities of Los Angeles and Beverly Hills, California. Shaw writes and teaches in the areas of real estate development and syndication