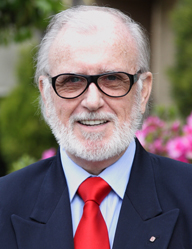 Donald M. Keegan is a founding board member of the Los Angeles Queen of Angels Foundation. Don was born to devout Irish American Catholic parents in the Crown Heights/ Park Slope section of Brooklyn, New York. To earn money to watch his childhood heroes, the Brooklyn Dodgers at Ebbets Field, he had a Brooklyn Eagle newspaper route.

This experience led Don to surround himself with intelligent people from all walks of life and ethnic backgrounds, a practice he maintains to this day. As a result, Don has achieved perhaps the best education possible — the street smarts of the streets of Brooklyn. On his 25th birthday, in 1967, he moved to Los Angeles.

It wasn’t until 1982 when Don was invited to join the Knights of Columbus at St Monica’s Church that he returned to Mass on a regular basis. Since that time he has moved up the ranks through the California State Council to become State Church Director for two years and then Assistant to a former State Deputy who became Secretary for the entire Order. Don was recognized nationally as Chairman of the 1992 Northridge/ Santa Monica Earthquake Knights of Columbus Relief Fund. One of his crowning glories was spearheading the 2007 Rosary Bowl in Pasadena for Family Theater with over 400 volunteers from the Knights of Columbus.

Also to his Credit was the formation of Our Lady of The Angels 4th degree Assembly in 2004, wherein he served as Charter Faithful Navigator. This was the first new Assembly formed in Los Angeles in 87 years. On Nov 11, 2008 the new St Martin of Tours Council 14660 in Brentwood, and on July 1, 2013 he began his term as Charter Grand Knight of the Cathedral of Our Lady of the Angels Council 2540.

Don spent most of his life working in financial services. He started on Wall Street as a mere messenger, and in short order worked his way up to becoming a floor broker and eventually trader. While working full time he attended New York University at night and received a BA in Business Administration. In 1975 he became a Managing Partner of a securities firm based in Beverly Hills (with seven branch offices located in three states) that bore his name. He retired in 1998 to devote himself full time to his church, the community and family pursuits.

In 1995 Don was invited to make his first pilgrimage to the Holy Land with 35 priests and religious nuns. This resulted in a much deeper spiritual path that has remained a daily commitment to our Lord and Our Church. The following year he was invested in the Equestrian Order of The Holy Sepulchre of Jerusalem. In 2000 he made a second pilgrimage with his daughter Alanna and visited the Vatican. Years later he was awarded the Order’s highest rank, the Knight Grand Cross. Over the years, he has served in a number of important capacities in the Western Lieutenancy. Currently, he develops new opportunities for the expansion of the Order in the Archdiocese of Los Angeles. He is also developing new fundraising activities for the Christians of the Holy Land.

Today Don is proud Grandfather to Ansley, Brayden, Connor , Devin, and Kellan, and travels to their home in Woodstock, Georgia as often as possible. He has finally found a little time for the stamp collection that he started in 1948 while listening to Miles Davis and Dave Brubeck one day, and Leonard Bernstein conducting Gustav Mahler’s Symphony # 2 the next. Of course, that is when he is not busy with all the major events at our Cathedral, like the Los Angeles Prayer Breakfast, the Grand Marian Procession and Votive Mass, One Life LA, the Red Mass, and, well, the list goes on and on!