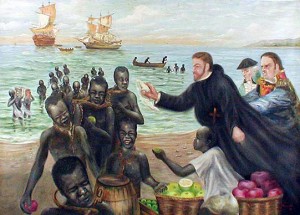 Black Catholics are a breed apart: a minority of American Blacks are Catholic; a minority of American Catholics are Black. Despite having faced centuries of discrimination by members of both their own race and their own Church, they have had an influence out of all proportion to their numbers. Having produced innumerable bishops and a Venerable en route to beatification (Pierre Toussaint), many of them often trace their ancestry to aristocratic Creole roots in Louisiana and the Gulf Coast. Still others find their ancestors in the wave of immigration from Haiti during and after that country’s wars of independence.

The last decade of the 20th century saw the growing imposition of the Jim Crow laws, as the freedoms given Blacks after the Civil War were steadily eroded in the South. Many organizations sprang up to oppose this trend, alas unsuccessfully. Moreover, the poverty that gripped so many Catholic enclaves in the North was not unknown in southern Black communities — even the Catholic ones. The Knights of Columbus during that period followed the method of “blackballing;” any single member of a council could end a candidacy for the Order. In many places this allowed one person to prevent any blacks from being accepted. In the face of this background, the Knights of Peter Claver were founded in Mobile, Alabama on November 7, 1909. 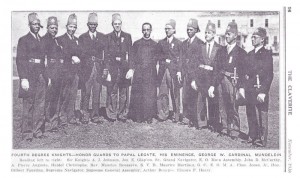 Led by the Josephite priest, Fr. Conrad Rebesher, S.S.J., the six other initiators of the Order were three other Josephites, Frs. Harry Dorsey, Samuel Kelly, and Joseph Van Baast; and three laymen — Frank Collins, Gilbert Faustina, and Frank Trenier. St. Peter Claver , “the Apostle of the Slave Trade” was chosen as patron. On the Sunday of November 9, 40 Black men were initiated at a Mass in the presence of the Bishop of Mobile. Outside of Mobile, the first two council were founded in the old Creole settlements of Chastang and Mon Louis, Mississippi. In 1926, the Ladies’ Auxiliary was founded — but one of the distinctive marks of the Order is that the Ladies division is fully integrated into the life of the organization on an equal basis. 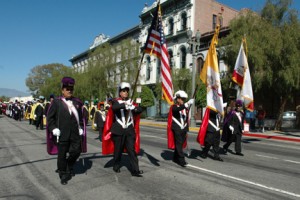 Members of the Color Guard of the Knights of Peter Claver marching in the Queen of Angels Foundation's First Annual Grand Marion Procession on September 3, 2011 in the Los Angeles Civic Center, leading to the Cathedral of our Lady of Angels

In many ways, the appearance and work of the Knights of Peter Claver mirrors that of the Knights of Columbus: color guards wear uniforms resembling those of the older Order — although regular members are distinguished by fezzes. The Knights are also, albeit on a smaller scale reflecting their numbers, involved in similar activities, such as vocations, education, pro-life work, and identifying and mentoring community leaders; the Order contributes large sums to the United Negro College Fund, and to New Orleans’ Xavier University. All of the religious orders that work in the Black community in the United States have benefited — financially and vocationally — from the work of the Order. Now a nation-wide organization, it is headquartered in New Orleans, Louisiana — in which state it is particularly strong. The knights contributed $100,000 to the construction of the chapel of Our Lady of Africa at the National Shrine of the Immaculate Conception. Here in the Los Angeles area, the first Council was chartered in 1941 at St. Odilia’s Church — not only the first outpost of the Order in California, but throughout the West.

Having received numerous Papal benedictions, it is no surprise that the Order counts within its ranks a number of Knights of St. Gregory, the Holy Sepulcher, and Malta, as well as holders of the Pro Ecclesia et Pontifice and Benemerenti medals. Like the Knights of Columbus, the Knights of Peter Claver is a constituent member of the International Alliance of Catholic Knights, based in the Palace of San Callisto, Rome. Although the specific focus of the Order is to a particular ethnic group, it nevertheless has been a great gift for the Church as a whole.

Sisters of the Holy Spirit and Mary Immaculate
http://www.shsp.org/